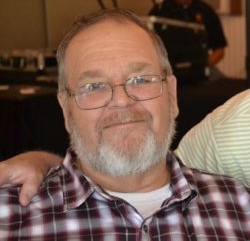 Randy Barlon Bangs of Rockdale, TX, son of the late Omer Barlon and Juanita Bangs, passed from this life on November 5, 2018 in Temple, TX.

Born in Shreveport, LA on July 28, 1954, Randy spent his early years living in Louisiana, New Jersey, New Mexico and numerous Texas cities while his father worked with the federal government. Eventually settling in San Antonio, he attended McArthur High School and participated in ROTC. After graduation in 1972, Randy enlisted in the US Navy where he served as a boiler technician/fireman. A big bear of a man, Randy was a long haul truck driver for many years. A great storyteller, he loved making family and friends laugh, regaling them with tales of his over the road adventures. A lifelong outdoor enthusiast, he loved hunting and fishing. Talented with his hands he could often be found working under the hood of a car while growing up. He was a great cook and and the smell of his brisket wafting through the windows will be missed. Always ready for a barbecue, he enjoyed cooking for family and friends and competing in cooking competitions.

A loving husband, father and brother, Randy is survived by his wife Jane, daughters, Courtney Dees, Winona Flippen, Trish Aceves and Mattielyn Bangs, sons Beau Soechting, Perry Flippen and J. Chris Elias and sisters, Candace Coffey and Cheryl Wittler. He is also survived by numerous grandchildren and great grandchildren, whom he loved dearly. Nothing made him happier than spending time with them. Randy never met a stranger and leaves behind many friends and extended family who will miss him and his big personality.

Baptized at an early age, Randy was a Christian with a servants heart. Involved in many missions, he was particularly passionate about feeding and clothing the homeless and spent time serving with the Promise Keepers movement.

Randy’s life will be celebrated on Sunday, November 18th at 2:00 pm at Calvary Baptist Church 1443 FM 487 South in Rockdale TX. You are invited to reminisce with the family during a light lunch and visitation at 12:30 pm prior to the memorial. Pastor Garland Moffet invites family and friends who would like to worship with Randy’s church family to join them for their morning service at 10:45 am.

Offer Condolence for the family of Randy Barlon Bangs