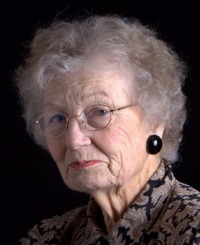 Mary Louise Hudson, 96, passed away peacefully in her sleep in the early hours of Sunday, March 23rd, 2014, at the home of her daughter and son-in-law in Cleburne, Texas.  Family was present and her daughter Sandra was by her side.
Mary Louise was born April 25th, 1917 in Pelican Louisiana, to William Thomas Lord and Louetta Smith Lord.  She met and married Frederick Holmes Cook Hudson in Gladewater, Texas.  They were married for 56 years, making their home in East Texas before moving to Kermit in 1949, with their children: Jacquelyn, Fred and Sandra.  Louise was active in the First Baptist Church of Kermit and worked at the Winkler County Library in later years.  Fred and Louise retired to the Ozark Mountains near Jasper, Arkansas, where they became active in the community and worked for a time at Dog Patch USA.  As an artist, Louise enjoyed meeting and working with local craftsmen and artists.  She was active in the Chamber of Commerce until moving to Cleburne in 2008.   Mary Louise instilled in her family her love of life, the beauty of nature, and appreciation for the gifts God gave her.  She is survived by her son Fred Hudson and wife Shirley Davis Hudson of Tyler, Texas, daughter Sandra and husband Wayne Callaway, ten grandchildren, many great grandchildren and great-great grandchildren.  Louise was preceded in death by her parents, husband, three brothers, four sisters and her daughter Jacquelyn Smyers.  A family celebration of her life well-lived is being planned for the near future.  In lieu of flowers the family requests donations be made to the Newton County Library, HC 31, Box 8, Jasper, Arkansas 72641.

Offer Condolence for the family of Mary Louise Hudson