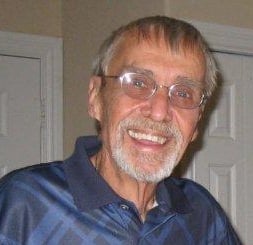 Kevin Darwin Steensen passed away peacefully on September 10, 2020 in Grapevine, Texas where he lived for 35 years.  He was born October 6, 1950 and was the second child and only son of the late Merrill and Nora Steensen. He will be laid to rest at a later date in the Guthrie Center Iowa Cemetery alongside of his parents and grandparents.  He was also preceded in death by his brothers-in law, Steven Arendt and Jim Brotherton, of whom he had lots of fond memories.

After graduating high school in 1969, Kevin attended William Penn before serving in the U.S. Army for 5 years and was extremely patriotic.  In 1985, he moved to Texas with his sister Michele and her husband Jim, when they were transferred to Texas for work.  After computer school and a few jobs, manager of Gatsby’s and working at Saia Motor Freight, Kevin made his career as a dispatcher for FedEx until his retirement 5 years ago.  Kevin loved to travel and tried to play golf wherever he went.  If not playing, he would go to as many golf tournaments/courses he could, the US Open being one of his special memories.  A sports lover, Kevin was an avid baseball fan, especially his beloved Dodgers.  He could tell you any statistic you needed to know.  Even though a Dodger fan he loved the Cubs finally winning the World Series again.  He also followed about every other sport, basketball, his Golden Warriors, football and of course golf.  Kevin golfed all his life, and it was hard on him when he finally had to give up a sport he truly loved to play.  Kevin loved getting together with his buddies, Scott, Richard, Maria, at the local bar to discuss sports and current events.  Always interested in the world of politics, Kevin kept abreast of the daily news reports often commenting in his wise, quiet way.  A loyal friend, Kevin kept in touch with classmates and truly enjoyed attending class reunions so he could catch up on their lives.

Kevin will be truly missed by his family which include his three sisters, Sherry Arendt of Virginia Beach, VA, Denise Letcher of Harker Heights, TX and especially by his sister Michele Brotherton of Grapevine, TX, who cared for him in his final years.  Kevin is also survived by his nephew John Brotherton and brother-in-law Fred Letcher, cousins and a slew of great friends. A tribute can be made to Kevin by contributing to your favorite charity or by doing a special act of kindness for someone.

Offer Condolence for the family of Kevin Darwin Steensen