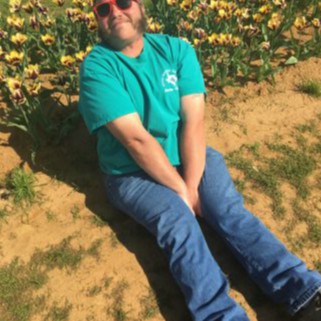 John Franklin Ridings was born on December 2, 1980 in Bangkok, Thailand and left for his next adventure on March 10, 2018.

John loved nature and the outdoors, especially plants and storms. He was wise beyond his years and packed many lifetimes into his short life. John went to military school, worked pipelines, graduated from UNT with a major in psychology, was a long haul trucker, and finally became a horticulturist, a career he felt was his calling. He was also a fiercely loyal friend, a creepy clown, an adventurer, a traveler, a person who shaped so many people’s lives for the better, and he never lost his sense of humor or upbeat attitude.

John grew up in Plano, Texas, but found his home in Denton. On June 11, 2017, John married Janet Laminack on the one year anniversary of their first date. Their wedding was held on the lawn of the Denton County Courthouse, with John reading his handwritten vows, “Milk. Bread. Eggs. Oops, wrong list.”

John is preceded in death by his father, Lloyd Ridings. He is survived by his mother Pat Ridings, his brother and sister-in-law Bert and Avneet Ridings, his wife Janet, his beloved rescue cats, Shadow and Shire along with many other family members and special friends.

The family would like to thank all of John’s friends for their help and support during his illness. They are especially grateful for the generosity of the UNT community for the enormous amount of donated sick leave.

Many people have helped John and Janet these past few years including bringing John flowers (and plenty of ice cream), no flowers or memorials are requested. However, if you would like to honor John, he was passionate about supporting cats in the animal shelter. Donations in his name can be made on-line: www.DentonASF.com, or by mail: DASF, P.O. Box 486, Denton 76202. John also wanted to help the homeless and under-employed, which he did by restocking the little pantries around town. Recently he learned that the biggest need at homeless shelters were new socks and underwear and he began encouraging friends to donate those items.

John will be cremated and his wishes were for the ashes to be spread somewhere beautiful to become a helpful part of the Earth, such as in a forest or a coral reef. The family will have a gathering to celebrate John’s life and swap stories about him with all his friends in the near future.

Offer Condolence for the family of John Ridings