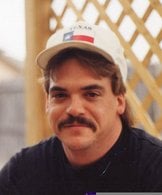 OBITUARY: James E. Moster, 48, died unexpectedly at home on September 20, 2012. He was born in Rome, NY on July 17, 1964, to Ann and Earl Moster Jr. Jamie was a 1983 graduate of Westmoreland Central School where he enjoyed playing football, baseball, and basketball. He also enjoyed hunting and fishing. He moved to Fort Worth, Texas in 1992, met and married his love Jeanne Ann Newsom. Jamie’s greatest joy in life were his children Lena and Cody. He was fortunate enough to raise his children as a stay at home Dad, but his most treasured times were when coaching Cody in baseball, and watching Lena play soccer, dance, and sing. He was their #1 fan. Jamie will be greatly missed by family and many friends but especially by his two best friends, his Labradors Blackie and Bo. Jamie is survived by his two beautiful children, Lena Marie and Cody Moster of Fort Worth Texas, mother Ann Moster, Rome, NY, sisters, Kim Cruz, Brownwood,Texas, Marcia Joslin (Mike) Cazenovia, NY, Lauri Losowski, Rome, NY, Shawn Loveland and husband Bill, Balston Spa, NY. He is predeceased by his father Earl Moster Jr. and brother-in-law Kevin Joslin. Jamie is also survived by many nieces, nephews, aunts, and uncles. There will be a celebration of life on Monday evening, September 24th at 7:30 pm at 4103 Windermere Court, Colleyville, TX 76034. There will be a second celebration at his hometown in NY where he will be laid to rest.

Offer Condolence for the family of James E. Moster