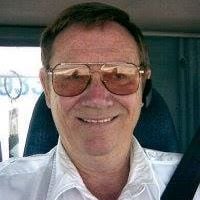 Fort Worth, TX – Gary Earl Williams was born April 5, 1947, and passed away in the early morning hours of March 28, 2018, at his residence in Fort Worth located on Lake Arlington, TX. He was under the care of Hospice. With him was his sister and best friend at the time of his passing.

Gary grew up in Velma, OK and graduated High School there. His father sent him off to Banking School in Oklahoma City, OK but all he ever wanted all of his life was to be a truck driver. He was a truck driver most of his life and retired from Walmart as a truck driver last year on his birthday when he turned 70. Three months into retirement, Cancer was revealed.

Gary loved life, people, his little dog, Mac, cooking, eating, fishing, hunting, flying his airplane, playing his guitar and singing, (he had a beautiful voice), helping people, and joking around. He was our Santa Clause at Christmas and was very generous with his gifts all through the year. Gary had many friends and people who loved him. He will be missed.

Offer Condolence for the family of Gary Earl Williams