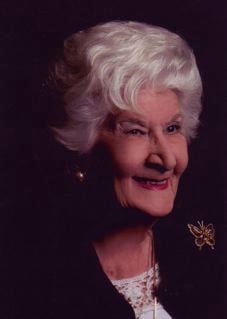 Dolores Jean Tumlin, born in Ames, Iowa on January 14, 1929, was a unique individual with a wonderful spirit of love and caring for all whether they were longtime friends or new acquaintances. Dolores passed through this life and into God’s eternal Kingdom Sunday March 25, 2012. She was 83 years young and although she was in her 9th decade of life she left us much too early. She was a self reliant person and always available to help others.
She married Archie Brawner in 1947 and they settled in Corpus Christi, Texas. She worked for the Nueces County Clerks office and later worked for Barry Construction. She was a founding member of Saint John’s Methodist Church in Corpus Christi and along with other members actually helped to build the original church.
She and Archie divorced in 1981 and she later married Jack T. Tumlin. She and Jack lived in Arkansas and later in Florida. She became an active and energetic member in the cause of Christ through  the Cristo movement. She became a dedicated worker for The Mansion in New Hampshire, a home for wayward youth.
Jack Tumlin died in 2006 and in 2010 Dolores moved to Texas to be near family.
She was preceded in death by her Husband Jack Tumlin,  Son,  Donald E. Brawner of Corpus Christi, Texas, parents Donald Davis and Peggy Cone; brother Donald Cone of Phoenix, Arizona and Sister  Charlene Williams of Corpus Christi, Texas.
She is survived by her son Bob Brawner and wife Joy of Aledo Texas, Daughter-in-law Cathy Brawner of Corpus Christi, Texas; six grandchildren, Shayne Brawner, Bryan Brawner, Kristen Brawner, Christopher Brawner, Kelley Brawner, and Brandon Brawner; great-grandchildren Taryn Brawner and Samantha Brawner. She had many nieces and nephews. She is also survived by her Step-Daughters Jane McCarthy and Husband Dave of Yorktown, IN; Evelyn Lambert and Husband Sam of Carollton, GA; and Barbara Anderson and Husband Wes of Stone Mountain, GA.
A memorials service will be held on Wednesday, April 4, 2012 at St. Francis Village Protestant Chapel at 11:00 a.m. Interment will be with her husband Jack Tumlin at the DFW National Cemetery.

Donations can be made to the American Cancer Society.

Offer Condolence for the family of Dolores Jean Tumlin