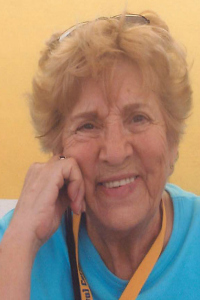 With heavy hearts, Colleen’s family and friends are saddened to let her go but know she is going to heaven to join her family above.

Colleen was born in Oklahoma to Richard Lee Allen Reinhart and Leora Evelyn Spoonemore Reinhart. She was born the only daughter with three brothers and learned early to be a tough sister, but loving and a caregiver, she so adored her brothers. Colleen was a Daddy’s girl and called “Sis” from her daddy because she was “his baby” but the name stuck with her. As a child she lived in Bristow, Okla., Benica and Long Beach, Calif. She met her husband of 23 years, Bryant Shaw, in Long Beach and went on to have one son and four daughters, and later settled in Texas. She was a homemaker and a wonderful stay-at-home mom. She loved to sew dresses for her daughters and cook. After divorcing she and her two youngest daughters moved to San Diego, Calif. She loved being out into the work force, meeting lots of new friends, and loving life. In 1981, missing Texas family, she relocated to Fort Worth. She spent most of her time with a family-owned business and babysitting grandbabies. Later in life she loved to travel to exotic tropical locations. She also loved to take cruises. Although she never learned to swim it never kept her from the ocean. Her most adventurous and talked about experience was being in the ocean with stingrays at the age of 81. She joined water aerobics and continued going into her 80s. She enjoyed her lunches with her friends from her water aerobics class.

She was always willing to lend a helping hand and never met a stranger.

For those who knew her, she will truly be missed. She has touched many lives with her smiles and her stories. She will live forever in our memories and in our hearts.

May the angels watch over you until we see you again.

Thank you, Mom (grandma, sister and friend), for all you have given us. We love you so very much.

Offer Condolence for the family of Colleen Jeanette Reinhart Shaw