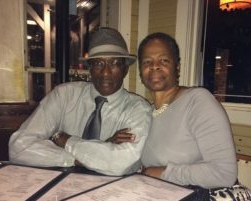 Carl Jones, 61, a long-time resident of Corpus Christi, passed away on Thursday, July 26, 2018 while residing in Dallas, Texas surrounded by his loving wife, family and friends.

Carl was born on January 17, 1957 in Harlingen, Texas to Sam Turner and Amanda Barnes. He grew up in Corpus Christi, Texas and attended Booker T. Washington, Charles Crossley and Solomon M. Coles and high school in Ingleside, Texas. He was employed as a Shrimper, Longshoreman, Laborer and Walmart.

After Carl relocated in Corpus Christi, Texas he married his life-long love Diana Stoney on April 1, 1977. The couple welcomed into this world four children, seven grandchildren and two great-grandchildren. Carl enjoyed his family, grandchildren and his music. His greatest pleasure was his time he spent with his children and grandchildren playing the percussions, his bass guitar and singing his nonsense songs.

Mr. Jones attended Calvary First Baptist Church until moving to Dallas, Texas. There he united with New Beginning United Outreach Ministry with Pastor Danny Lambert. Carl became part of the music department and enjoyed playing his bass guitar. He found much joy in his church contribution while praising God.

A service to celebrate Carl’s life will be held at 11:00 a.m. on Saturday, August 11, 2018 at Calvary First Church in Corpus Christi, Texas.

Offer Condolence for the family of Carl Jones