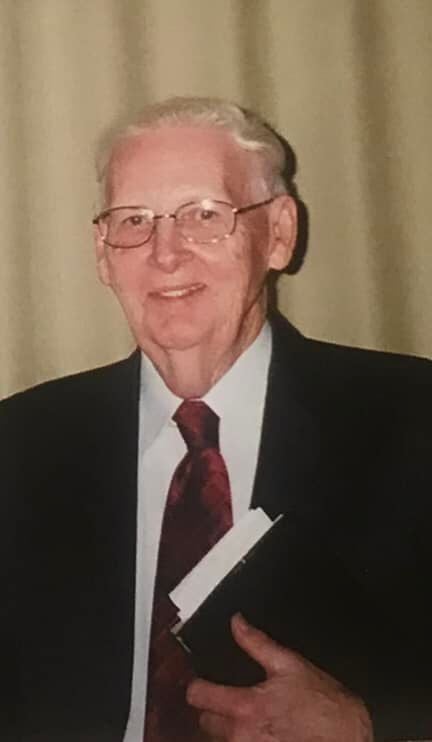 Bill was the son of Russell Palmer Hamrick and Eoma Thatcher Hamrick. He began preaching at the age of 17. Bill graduated from Verden High School in 1951 and attended Central Christian College in Bartlesville, Oklahoma from 1951-1953, where he developed a lifelong network of friends and coworkers in the gospel. Following graduation, he preached in Carnegie and Roosevelt in Oklahoma.

He enlisted in the Air Force in 1956 and was stationed temporarily near Belleville, Illinois, where he met Lenora Jean Cross, the future Mrs. Hamrick. He was soon transferred to Birkenfeld Air Base in West Germany, and his correspondence with Lenora Cross eventually became a courtship separated by an ocean. After his discharge, Bill and Lenora were married on February 22, 1960, in Lilbourn, Missouri.

His next preaching work was in Villa Hills, Illinois; then in Doniphan, Missouri; in Hinton and Geary in Oklahoma; in Wichita, Kansas; and in Blackwell, Oklahoma. In 1973 he became the pulpit minister at the Northside Church of Christ in Tulsa and helped bring about a period of significant integration which saw the appointment of African American deacons and an associate minister in a majority white congregation. He mentored younger preachers, taught in the Owasso School of Biblical Studies, and held gospel meetings in Oklahoma, Arkansas, Missouri, Kansas, Texas, and Louisiana.

In 1980 Bill was asked by the Northside elders to be director of the Turley Children’s Home (today Hope Harbor Ministries). He worked to develop staff and to implement standards, and secured the donation of land for the present campus in Claremore, Oklahoma. He was an officer of the Oklahoma Association for Children’s Institutions and Agencies and served on the governor’s Child Care Advisory Committee. He continued preaching part-time at Bartlesville, Braggs, Glenpool, and Beggs.

He stepped down from the directorship in 1995 but continued in other roles at Hope Harbor for another decade. He entered a new field of service as a prison minister in 2007, conducting life skills classes and Bible studies in facilities across eastern Oklahoma. Parkinson’s disease forced his retirement from his works in 2018, when he was honored as preacher emeritus by the Glenpool Church of Christ.

Preaching the gospel of Christ was Bill’s greatest desire from his youth on. His style was calm, reasonable, but firm, with confidence that the truth speaks for itself. He lived out his commitment to the gospel through his promotion of racial understanding in the church, through his work for children and families in crisis, and through his counsel and support for the incarcerated.

Bill Hamrick is survived by his wife of 62 years, Lenora Hamrick; by his sister, Ann Tyler of Duncan, Oklahoma; by his children, Karen Denson of Hurst, Texas, Laura Powell of Colleyville, Texas, David Hamrick of Bedford, Texas, and Shellie Hamrick of Killeen, Texas; by eight grandchildren, and by five great-grandchildren.

Offer Condolence for the family of Bill Hamrick