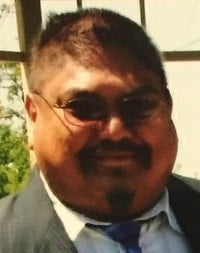 Alexander Mendoza Terronez, 59, of Rio Vista, Texas passed away the morning of Friday, October 21, 2016 in Burleson, Texas, surrounded by loved ones, at Texas Health Huguley Hospital of Fort Worth, Hospice Care. Born June 12, 1957, in Meridian, Texas, he was the youngest son of nine, to parents Ascension Terronez and Delores Solis.
He is survived by his brothers, Joe and wife Antonia Terronez, of Rio Vista; Luis Terronez of Rio Vista; and Antonio and wife Sylvia Terronez of Cleburne. He is also preceded in death by both parents, Ascension and Delores Terronez, and brothers, Ascension Jr., Angelo, Ernest , Domingo, and Rueben.
Alexander is survived by his wife of thirty-one years, Deborah Ruth Terronez. The two became one on February 14, 1985 after a first date to watch “The Thing”.
A man that exhibited a great level of patience from first-time fishing for Buffalo Fish to swimming at Cleburne State Park to learning to drive down country roads, he was a proud father, who made a lasting impact to four children: Michael and wife Jill Williamson, of Albuquerque, New Mexico; Elaina of Fort Worth; Chris Williamson of Arlington; and Michelle Terronez and David Segerstrom Jr, of Crowley, and his five beautiful grandchildren: Alyssa, Victor, Kayla, Corbin, and Blake. Forevermore Papas Pelón.
Husband, Dad, Brother, and Friend. Of great strength and integrity, we remember this godly man.
The family had chosen to commemorate his life with a memorial at the Rio Vista Full Gospel Church on Sunday, October 23, 2016.

Offer Condolence for the family of Alexander Mendoza Terronez