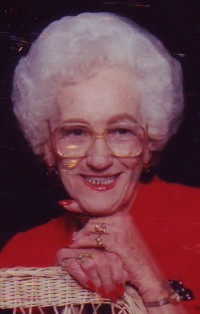 Virginia was born December 4, 1922, in Dallas to Ace Long and Mattie Thompson Long. She moved to Ft. Worth as a child and lived many years there. She also lived in El Paso, Westworth Village and Keene, Texas. She lived the last 4 years in Burleson. She served in the US Army, then became a housewife and mother. Later in life, she worked at Mitchell’s Department Store in River Oaks and Wal-Mart, from where she retired. She was married to Harold J. Allen Sr. for many years until his death in 1985.  She was preceded in death by her parents, Ace and Mattie; sisters Dorothy Franks, Esthyr Williams, Joanne Buyher, and Minnie Beth Long; brothers Norman Ray Long, Bobby Jean Long, Jimmy Long and A.C. Long; her husband Harold; childhood friend Dottie Boorman; and companion in her later years, Ed Boorman.

Memorials: In lieu of flowers, donations may be made to Community Hospice of Texas, 1208-B West Henderson Cleburne, Texas 76033. Our great heartfelt thanks go to nurse Jack Ross, aides Sherri Parson and Erin Haskins, and social worker Catherine Allord, with Community Hospice, for the help and comfort they provided over that last year of Virginia’s life.

Offer Condolence for the family of Virginia Gyla Allen