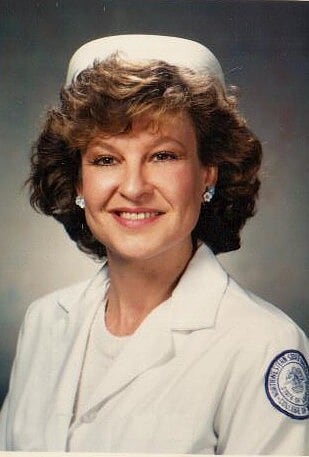 Theresa Kathleen Saxon, “Terry” formally of Wichita, Kansas, went home to heaven on Monday, August 17, 2020 at age 69 in Tyler, Texas.
Theresa was born on October 27, 1950 in Wichita, Kansas to Earl Miles Saxon Jr. and Ruth Virginia Saxon. She graduated from Madonna High School in 1968. Later, she pursued her passion of care giving and graduated with honors from Northwestern State University with an Associate Degree in Nursing in 1988. Her career as a nurse was central to her life and was her passion for 26 years. She was employed at Schumpert Medical Center in Shreveport, Louisiana for 13 years. Combining her love of travel and nursing, she became a traveling nurse and lived in many beautiful places including Mesa, Arizona; Ashville, North Carolina; and Tyler, Texas.
Theresa was blessed with two great loves. Her first love was Stephen “Larry” Phillips with whom she has a son and a daughter. They made a home in Many, Louisiana on “the farm”. With a love of the 60’s movement and being self sustaining, they had lovely gardens, farm animals, fishing ponds, and many acres to explore and enjoy. Later, she made a wonderful home and life with Howard Ham in Elysian Fields, Texas with his two daughters and later their own son.
She is survived by her son, Ryan Phillips of Tyler, Texas; her daughter, Angie Smith of Shreveport, Louisiana; David Ham of Stuart, Florida; her only grandchild, Emily Smith of Austin, Texas; and step-daughters Julie Eldridge of Forth Worth, Texas and Margaret Howard of Las Vegas, Nevada.
She is survived by many kind and supportive siblings including:
Cyndi Saxon of Tucson, Arizona; Paul Saxon and his wife Linda from Brandon, Florida; Danny Saxon of Tucson, Arizona; John Saxon and his wife Kim from Conroe, Texas; Steve Saxon from Montgomery, Texas; Richard Saxon and his wife Kathy Saxon from Bellevue, Texas; Raymond Saxon and his wife Debbie of Montgomery, Texas; Robert Saxon and his wife Leah also from Montgomery, Texas; and her baby sister Mary Saxon that resides in Wichita, Kansas. She is also survived by many nieces and nephews.
Proceeded in death by her mother and father, Earl Saxon Jr. and Ruth Saxon –Koetter, and her brothers, Earl Saxon III and David Saxon.

Throughout her life she visited many states and countries and enjoyed the outdoors and also enjoyed sports as well. She loved to water ski, snow ski, and loved her daily fast walks. She traveled many roads towards her own spirituality and had a passion for learning. She loved the “vibe” of Sedona, Arizona and often visited for the spiritual practices. Living in Asheville, North Carolina she was part of a Shaman Retreat Community that helped her find peace and welcomed her as a seeker, as she used to say.
She was loved and cherished by all that knew her. Her personality was big and her love of others was big. She will be missed and thought of often as we hold her in our thoughts and minds until we meet again in the promised afterlife.
Her celebration of life with family and friends will be at a later date due to the current affairs.

Offer Condolence for the family of Theresa Kathleen Saxon