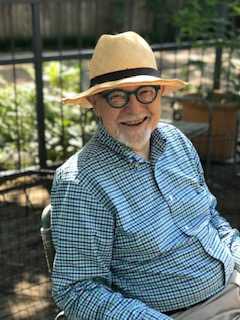 Dallas, TX – Richard (Rick) Robson Brettell passed away peacefully on July 24, 2020 after a long battle with prostate cancer. The world of art history and museums has lost a real mover and shaker who used his energy, creativity, powers of persuasion, and sheer will to make things happen. As a scholar, he was among the foremost authorities in the world on Impressionism and French Painting of the period 1830-1930. Rick was born in Rochester, New York and grew up in Denver, Colorado. He went east to Yale University where he received both his undergraduate (BA) and graduate (MA, PhD) degrees. As an undergraduate he worked with the well-known scholar of impressionism, Robert Herbert, and with the famous architectural historian Vincent Scully. Under Professor Scully he completed his senior essay on the country houses of Sir Edwin Lutyens, an early example of his love of architecture. He went on to do a Master’s Essay on Denver Architecture which became his first book, Historic Denver. For his PhD he began work on the French painter, Camille Pissarro (under the mentorship of Anne Coffin Hanson) and at a very young age mounted the first international exhibition of Pissarro. His dissertation, “Pissarro and Pontoise”, was published with Yale University Press. He also published, with Christopher Lloyd, a book about Pissarro drawings in the Ashmolean Museum at Oxford University. After two years in Europe, he and his wife, Caroline Brettell, moved to Austin in 1976 so that Rick could take up a position as Assistant Professor of the History of Art. At UT he taught a famous course “Modern Art and the City of Paris”—many of his former students who live in the Dallas remember it well. In 1980 he and his wife moved to Chicago where Rick took the position as Searle Curator of European Painting at the Art Institute of Chicago. There he oversaw the complete renovation and reinstallation of the European Painting and Sculpture Galleries as well as mounted several significant international exhibitions including “A Day in the Country, Impressionism and the French Landscape”, for which he was awarded a Chevalier in the order of “Arts et Lettres” by the French Government; “The Art of the Edge” (an exhibition about picture frames); and “The Art of Paul Gauguin” (a second painter about whom he has become an expert). Rick moved to Dallas in 1988 as McDermott Director of the Dallas Museum of Art where he continued to mount important exhibitions including “The Impressionist in the City: Pissarro’s Urban Landscapes”. He also brought “Images of Mexico” and “African Art: Ancestral Legacy” to the DMA—both with innovative installations–something he enjoyed doing. He also raised $55 million for the completion of the Hamon wing. He left the museum in 1992 and worked as a museum consultant for several years before joining the faculty of UTD in 1998 as the Margaret McDermott Distinguished Chair in Art and Aesthetic Studies. In Dallas, he helped to found the McKinney Avenue Contemporary and the Dallas Architecture Forum. Nationally, he advised the Sara Lee Corporation in the dispersal of its art collection as a “Millennial Gift”, an effort that earned that corporation a National Medal of the Arts in 1999. He also recorded a series of lectures for “The Teaching Company” and as he travelled throughout the world people would recognize him and come up to say “You are Richard Brettell, aren’t you!” With Elizabeth Rohatyn, who was then the wife of the Ambassador to France (Felix Rohatyn) under President Clinton, and Francoise Cachin, former Director of the French National Museums, he founded and directed FRAME (French/Regional/ American Museum Exchange), a project in cultural diplomacy which brought together 12 French and 12 American museums to interact and share collections and mount exhibitions. For this effort, he became a “Commandeur” in the French Order of Arts et Lettres. He also founded the Brettell Seminars, a subscription lecture series with a travel component. With his partner Robert Kendall, Rick led small groups to all corners of the world to look at art and visit artistic sites. A few years ago he realized a dream—to see the temple at Borabadur and the friezes that inspired Gauguin. At UTD he established with the support of the O’Donnell family, the Edith O’Donnell Institute of Art History and served as its Founding Director until 2019. He also established the Institute for the Study of American Art in China (ISAAC) at Nanjing University with support from the Terra Foundation. Chinese art historians have been spending a year at UTD as they tour the country looking at American art and developing their knowledge. More recently, he has been working on the development of an Athenaeum for UTD that would house a library as well as important art collections. At UTD, Margaret McDermott established the Brettell Award in the Arts to honor Rick. Rick has authored numerous books, most recently “On Modern Beauty: Three Paintings by Manet, Gauguin and Cezanne” and he has continued to spearhead major exhibitions around the world. He has also finalized the Catalog Raisonné of Paul Gauguin and has been working on establishing a Museum of Texas Art. Rick also served as the Art Critic for the Dallas Morning News from 2015-2019. In the spring of 2020, he, like his wife three years earlier, was elected to the American Academy of Arts and Sciences. Rick has packed three lifetimes into one and still had more to do. In his spare time he was an accomplished pianist and loved both the symphony and the opera. He was also was an excellent cook and relished a good meal and spending time with his long list of friends and colleagues.
In addition to his wife, Rick is survived by his 94 year-old mother and three sisters as well as numerous nieces and nephews. Due to Covid-19, a Celebration of his life will be held at a later date. In lieu of flowers, please send gifts to the University of Texas at Dallas to support the “Richard R. Brettell Reading Room” in the future UTD Athenaeum.

Offer Condolence for the family of Richard Robson Brettell