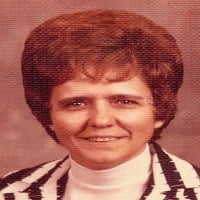 Louise married Glen Tidwell on September 24, 1945, and they remained sweethearts until Glen’s death in 2010. Early in their marriage, they toured New Mexico with their western swing band, the TW Ranch Hands. Louise sang harmony with Glen and was the band’s drummer.

After her daughters had finished college, Louise pursued her own education, earning an R.N, a B.A., a masters degree, and a specialty in trauma. She was honored as one of the Great One Hundred Nurses of Texas. When she retired, she was Director of Tri-Care at the Veteran’s Administration in Fort Worth.

Louise loved her family and was happiest when all, family and friends, could get together at her house for dominoes, music, and “chalupees.”

Louise is survived by her daughters, Pat Hart, Janet Tidwell, and Debbie Lauterbach; her sister Dorothy Uniat, seven grandchildren and fourteen great-grandchildren with another expected soon.

Offer Condolence for the family of Louise Morgan Tidwell