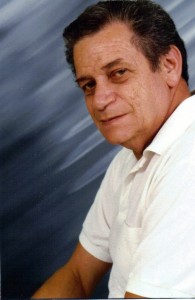 Joseph Fred Iervolino, 71, resident of Corsicana, TX, born on September 22, 1939 in Manhattan, NY, passed away on Tuesday, Oct. 19, 2010, at Parkland Memorial Hospital in Dallas.
Joey was preceded in death by his father, Fred Joseph Iervolino, and his mother, Faye Meinero.
He is survived by his loving wife of 24 years, Lorraine Iervolino, of NY and Corsicana. He is also survived by his daughter, Kimberly Elicia Cook of NC, his step-daughter and son-in-law, Jeanette and Kevin Sparks, Corsicana, and his step-son, James Lawler of New Caney, TX. The grandchildren are Patrick and Harrison Sparks and Clayton Lawler. Joey is also survived by his sister and brother-in law, Phyllis and Walter Wilson of Bohemia, NY, and his brother and sister-in-law, Philip and Deborah Meinero of West Babylon, NY. His loving sister-in-laws are Jeanette Jordan of Islip, NY and Carol Van Houten of Bayshore, NY. He is also survived by several nieces and nephews and great-nieces and great nephews who also reside in New York.
Joey was a great man who lived a full-bodied live. Wanderlust led him to make many friends across this country as he worked as an Envelope Machine adjuster, a job he loved and held since the age of 17. He retired from Williamhouse of Texas in 2006. His biggest loves in his life were his wife, his friends, his family, and his co-workers. He had a special knack for making the people he loved feel how special they were to him: no small event was overlooked and no opportunities to buy chocolate cakes were neglected. All knew that you could not be around Joey without knowing how important you were to him. He will be missed by all.

Offer Condolence for the family of Joseph Fred Iervolino