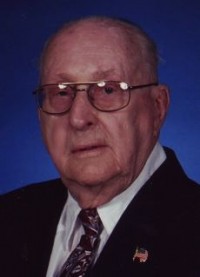 BURLESON — John R. Hicks Jr., 94, passed away Saturday, Nov. 27, 2010.
Memorial service: 10:30 a.m. Thursday in Mayfield Kiser Funeral Home Chapel. Interment: Dallas-Fort Worth National Cemetery at a later date.
Memorials: In lieu of flowers, memorials may be made to Emery J. Lilge Hospice, 301 Medpark Circle, Burleson, Texas 76028, or St. Ann Catholic Church, Burleson.
John was born to Ada and John R. Hicks on Sept. 18, 1916. He was a member of the Michigan National Guard and served with the U.S. Army during World War II. He was a chief warrant officer in the 32nd Division headquarters and was stationed in Australia, the Philippines, New Guinea and Japan. He returned home after 3 1/2 years. He was employed by Ametek Laundry Machinery Co. in East Moline, Ill., and retired after 23 years. He was later employed by the Texas Mental and Retardation Division, from which he retired in 1985. After retirement he enjoyed motorhoming with his wife and friends. He was a member of St. Ann Catholic Church. He volunteered at Huguley Hospital in Burleson.
Survivors: Wife of 68 years, Elaine; sons, James and wife, Madelaine, of Snohomish, Wash., and Rick and wife, Maria, of Burleson; grandchildren, John Hicks of Everett, Wash., Elizabeth and husband, David Moss, of Federal Way, Wash., and Brandon Hicks of Burleson; and many nieces and nephews.

This service will be web-cast live.  To view the service CLICK HERE.

Offer Condolence for the family of John R. Hicks Jr.