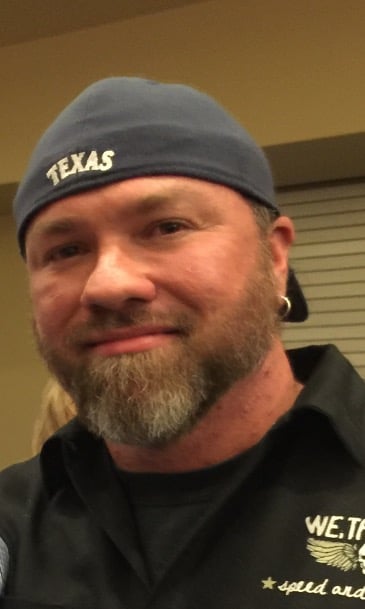 He was born on July 8, 1975, Midwest City, OK, the son of Tommy W. and the late Joetta Fonville Sanders.
Jay went to B.E. Boswell High School through his Junior year, and graduated from Azle High School, in 1994. Following graduation, like most, Jay had a few different career paths, but the two that meant the most to him were being an Electrician and his final position as Building Superintendent II, with Tarrant County Facilities Management, where he was employed since November 2009.

Jay found his soulmate, Jessie McElroy-Sanders, in 2009 and lived for each other, every day since. Between them, they had 8 children and 8 grandchildren, whom he loved with every fiber of his being.
Jay loved ALL things music but guitars and Metal music, fed his soul. Even in sleep, you could find his hands conducting some sort of masterpiece in his head. Jay would often clear his head while riding his motorcycle. Whether on the daily commute or weekend rides with Jessie, this was something he often enjoyed.
He was predeceased by his beloved mother, Joetta, Grandfather Marcus, and his Pop John.

Offer Condolence for the family of Jason “Jay” Byron Sanders