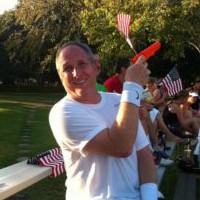 James Ray Arnold, age 57, passed away on May 8, 2017, successfully saving civilization from a catastrophic meteor that was headed to a back yard near you. Some might call him our very own Bruce Willis. We just call him Jim.

Jimmy had a successful career as an air traffic controller. As if this wasn’t stressful enough, he was also a reserve police officer for the City of Bedford. His passions included flying, tennis, the Cowboys, cooking, magic tricks, astronomy, and having the T.V. up entirely too loud. He had a passion for learning and upon retirement from the FAA, he went on to EMT school where he graduated at the top of his class as a paramedic.

Among the people he heroically saved from the potentially world-ending meteor are his loving wife Debbie, her children Nick and Alex Rainey, his children, planned Krista (her husband, Tom), accidental daughter Kelly (her husband, Bald), planned Matthew (red), and grandchildren Madisson, Makenna, Kerrington, Lila and Kate.

Offer Condolence for the family of James Ray Arnold