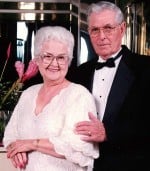 The angels visited our home.

Never again will we see the smile on her face as she watches her grandchildren and great-grandchildren grow and mature in their lives.

Never again will she travel to faraway places with us. She is now on a journey she must make without us, but she wasn’t alone. The angels escorted her to Heaven and we know that our Daddy was there to meet her at Heaven’s Gate. We know there was a happy reunion when she saw all of her family there.

She lived a long and happy life, full of adventures.   She loved her family and we loved her. She was respected and admired by many people and had a strong and positive influence on their lives.

It meant a lot to her that she had nieces and nephews that still kept in touch with her on a regular basis, many years after their own parents were gone. They affectionately refer to her as “Aunt Bob”. One of her great-nieces recently told me that “She knows everything about everything. My momma said she did.”

Henrietta was driven to live life to the fullest from the time she was little. Her adventures included being a pilot, and a commercial bus driver, backpacking thru Europe for a month, cruising the Mediterranean and Caribbean, sjiowskiing in Colorado, extreme parasailing in Hawaii, skydiving and racing an Audi at the Texas Motor Speedway.

Her world travels included Great Britain, Australia, New Zealand, Canada, and Europe. She was in the middle of the Blizzard of the Century when it hit Europe. At the ferry station, only the soccer team had been allowed to board the ferry as they were the only passengers considered essential. Everyone else was stranded there for the night, so she curled up and slept peacefully on the floor, while her fearful sister stood watch. In 1999, she went on a Mediterranean Island Cruise with her husband and daughters, also visiting Athens and Istanbul. In 2000, she went on a Cruise with her youngest daughter, visiting Tahiti and many French Polynesian Islands, including Bora-Bora.

When Hurricane Juan hit Nova Scotia in Sept. 2003, she was in the middle that, too. When asked mid-flight, gnjojJtg to Halifax, why she didn’t mention it was going to hit there within 24 hours, she replied, “Yep, I knew about, but I wasn’t going to cancel our plans, anyway. So what difference does it make?” Sure enough it hit.   No power for 3 days.

She was married for more than 60 years to Miles C. Freeman, Jr. They met in her hometown in Illinois, fell in love and were married within 6 weeks. They returned to Texas, where she decided that she wanted to go to work. That’s when she became the first woman bus-driver in Harlingen, Texas.   They raised 2 daughters, Pamelia and Linda, and helped raise 3 of their grandsons. Extremely organized throughout her life, she cared for her home and family, and still managed to find the time to faithfully attend church, work full-time, further her education, extensively research her

After she retired in 2006, she was able to travel more freely without time constraints. During that time she enjoyed visiting every state in the U.S. including Hawaii and Alaska.

In 2010, she greatly enjoyed a family reunion to Mexico with almost 30 members of her extended family. She was blessed by God with a long and full life. She’ll be greatly missed.

One of her favorite sayings, known by all, “We don’t take trips, we have adventures.” This was, basically, her philosophy of life.

She was preceded in death by her parents, Henry and Grace Brown Joplin; one brother; five sisters; her husband, Miles C. Freeman, Jr., granddaughter Kiesha Adcock, and great-granddaughter Alanna Gallagher

Offer Condolence for the family of Henrietta Pearl Freeman