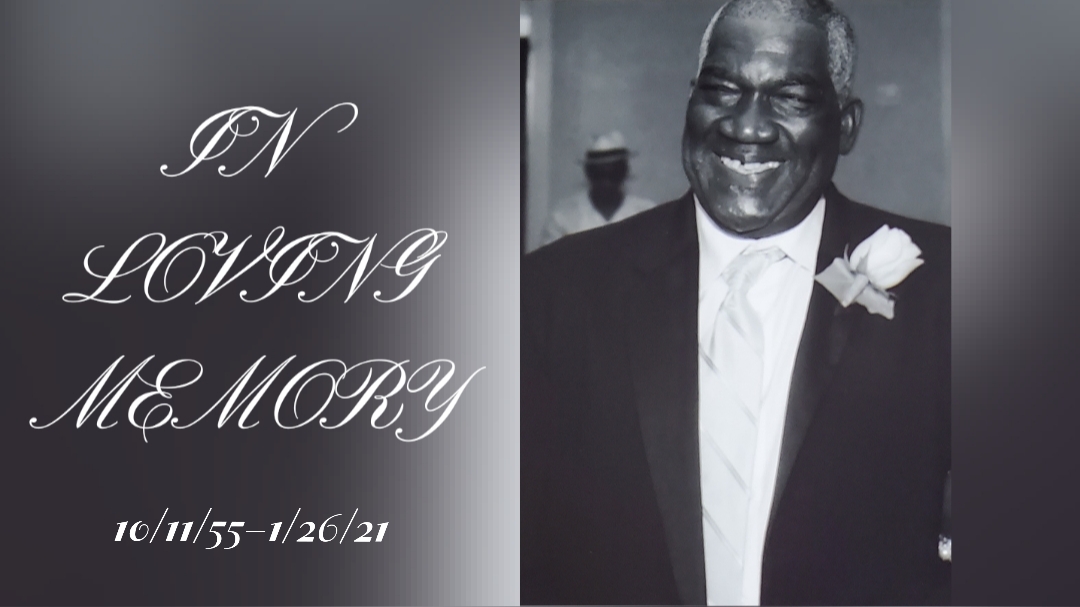 “Blessed is the man who remains steadfast under trial, for when he has stood the test, he will receive the crown of life, which God has promised to those who love him.” James 1:12

Born Calvin Mitchell Jackson on October 11, 1955 in Hartselle AL, to Mary Emma and Lee Issac Jackson. Calvin was 4th of 7 children. As a child, there were two things that were a must, learning about God and how to work the land (hunt, fish, farm). As he got older, he was given the option by his mother to leave the fields early and start dinner, which initiated his love for cooking.

In the mid-seventies, at a Skating Rink in Huntsville AL(his favorite past time as a young adult) while tying a young lady’s skates. He stated he was approached by another young lady(his future wife) who asked “Are you goanna lace up my skates too?” He said he bought pom poms for her skates and the rest was history. Their first child Tammisha Michelle was born and they were married soon after on March 12, 1979. Their second child, Meghan followed. Calvin worked in Construction as a heavy equipment operator. He enjoyed operating the equipment like playing with Tonka trucks, his employer often said “Calvin can do anything” and he has left his mark on many cities.

Calvin’s wife passed away in 1997 and he never remarried. But. remained a devoted single father. Calvin never met a stranger, had the gift of gab, used Confucius like sayings, and fed everyone who came through his door, something, he learned from his upbringing.

Calvin departed this life peacefully on January 27, 2021 in Dallas, TX.

Calvin was preceded in death by his wife, Joyce Jackson, His father Lee Isaac Jackson, His mother Mary Emma Jackson, His sister Peggy Toney, and His brother, Isaac Jackson. Calvin is survived by his daughter Tammisha Jackson, GA, his daughter Meghan Williams, Son in-law Demarrio Williams, Grandchildren Demarrio Williams II, Damarion Williams, and Daliah Williams all of TX, his Sister, Blonia Sidberry (Daniel) of NY, His Sisters, Carolyn Turner, and Yolanda Jackson (Harold) both of AL, and his Brother Danny Jackson, AL. Several close nieces and nephews, Jermaine Jackson, Jessica Artis, Lucretia Hereford, Jeremy Hereford, Donnie Hereford and a host of other nieces and nephews, and a great deal of other family and friends whom he loved very much.

A life of celebration for Calvin will take place in the future in Huntsville, AL with family and friends.

I can’t tell you who my dad was through deep conversations we had or intellectual banter. We weren’t a family who showed emotion we didn’t hug or kiss or say I love you. My parents showed love by making sure you had a roof over your head, that you were fed and clothed and had basic amenities like most black families of the south and we were as southern and country as you could get a little country town in Alabama, Valhermosa Springs.  I know my dad through the stories he told the dreams he had and the lessons he taught.

Calvin loved to hunt and fish and it wasn’t just a hobby for him it was also a survival skill sometimes I would go with him he taught me how to shoot pistols handguns, shotguns looking back I’m sure he wanted a boy but I never knew and he made do with what he had like he always did.

Calvin was a man of many talents he took pride in his cooking skills and so did everyone he cooked for especially me and my sister Meghan I think that’s why we’re foodies to this day. I remember asking, Dad if you could be/do anything what would you be he said a chef. Looking back, I feel instead he chose to be a husband and father.

I remember him loving Kung Fu movies (VHS) he had a huge collection and would watch them over and over. I could not understand for the life of me why he liked these movies where the words never matched the lips of the people speaking he’d always try to get me to watch it with him when I’d rather read a book almost every time I sat down he’d say… Look at this part, the protagonist in the movie would do some kind of spectacular kick, flip, spin and Calvin would turn and look me dead in my face and say hmm hmmm hmmm reminds me of myself I would just laugh cause he was more entertaining than the movie. Looking back now I know that was his way of saying daughter come spend time with me.

I remember one of the many troubles I had gotten into again and him saying…. I can tell Meghan the oven is hot don’t touch it she won’t touch it. I tell you Tammy the oven is hot don’t touch it nooooo you got to touch it to see for yourself and now you have a burnt hand. I’m not going to tell you anything that would hurt you. Looking back he was preparing me for life, teaching me to be wise to learn from my mistakes to avoid unnecessary hurt and pain to make life easier for myself not harder and isn’t that what every great father or parent does and/or wants for their children because they know they won’t always be there physically. So they prepare you for life’s pitfalls.

I wish I would have told my dad when life gets harder and I want to give up I remind myself I’m the culmination of two of the strongest people I’ve met one who knew how to live off the land a survivor, once a boy who was pulled out of school to pick cotton and one who walked to school in the snow uphill both ways, sometimes with no shoes on. I’m a Jackson if its one thing we know how to do it’s survive.

So in closing Calvin Mitchelle Jackson was many things he was a husband, comedian, hunter, fisherman, storyteller, cowboy fan, chef, martial artist but what I’m most proud of is that he chose to be me and my sisters father because we were blessed to reap the benefits of every character he embodied and he will never die because his DNA, his lessons and stories will live through his children, his sisters, his brothers, nieces nephews and his grandchildren

Offer Condolence for the family of Calvin Jackson